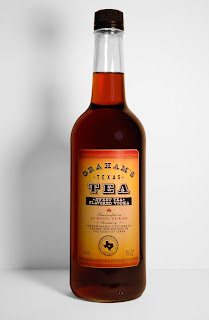 Texas and sweet tea just go together – so when we decided to develop a sweet tea vodka, we expected it to go over well - but since we launched Graham’s Texas Tea over Memorial Day Weekend, even I have been excited by the response. A few sweet tea vodkas have hit Texas liquor store shelves over the past year, so it was important to us to use high quality ingredients and keep the price low... so that’s exactly what we did.
Sweet

The “sweet” in our sweet tea vodka comes from pure cane sugar.  I tried using several different sugars and honeys, but finally landed on pure cane sugar because it is cleaner than the alternatives (such as the widely used high-fructose corn syrup) so that it actually complements the flavor of the vodka and tea instead of covering them up.
Tea
The tea turned out to be the most important of the three ingredients, and selecting the right tea turned out to be harder than I first thought. I tasted between 40 and 50 different types of tea trying to figure out in which direction we wanted to go – and I now know more about tea than I ever thought possible. It was during this time that I met Jeffrey Lorien of Zhi Tea in Austin; after many discussions and tastings, we decided to go with a Nilgiri tea.  What appealed to me were the Nilgiri tea’s intense flavors, strong fragrance and a balanced body.  It's starkly different from the American and English breakfast teas most are used to - one smell of our Texas Tea and you can tell the difference.


Vodka
We bring in vodka that has been distilled and filtered four times, then put it through our own proprietary polishing process resulting in one of the cleanest, simplest vodkas I've ever had.  To make our Texas Tea, we steep the tea leaves directly in the vodka, so creating a vodka that didn't have a burn or big nose but still had a smooth taste was key.

Part of the beauty of Graham’s Texas Tea is how simple it is to enjoy with its own pure flavors (just add water!) or you can get creative and mix it with lemonade or your favorite fresh fruits. Our distiller, Chris Lamb, came up with a great recipe called the Texas Fuzz.  It's pretty simple - muddle the tea with peaches and mint, strain over ice and top with a splash of still or sparkling water.

Look for us at most Austin liquor stores and all across Texas – and comment below to let us know how you like to serve the tea!
Posted by Treaty Oak Distilling Co. at 6:09 PM